The Rothko Chapel and Bernard and Audre Rapoport Center for Human Rights and Justice presented the 4th Annual Frances Tarlton “Sissy” Farenthold Endowed Lecture Series in Peace, Social Justice and Human Rights, which honors Sissy for her relentless pursuit of social justice. We celebrated an evening with Elizabeth Yeampierre as she explored how vulnerable communities are both experiencing and responding to the disproportionate effects of climate change. She drew on the work of climate justice activists in places ranging from Brooklyn and Houston to Puerto Rico to help us consider how we might participate locally in the creation of a more just and equitable society. The lecture was a part of the Rothko Chapel's exploration of human rights issues surrouding climate change, culminating in a three day symposium "Toward a Better Future: Transforming the Climate Crisis," February 28 - March 2, 2019 at the Rothko Chapel and University of St. Thomas.

About the lecturer:
Elizabeth Yeampierre is an internationally recognized Puerto Rican environmental/climate justice leader of African and Indigenous ancestry, born and raised in New York City. Elizabeth is co-chair of the Climate Justice Alliance, a national frontline led organization, and Executive Director of UPROSE, Brooklyn’s oldest Latino community-based organization. She was the first Latina Chair of the USEPA National Environmental Justice Advisory Council. In 2010, Elizabeth was the opening speaker for the first White House Council on Environmental Quality Forum on Environmental Justice under Obama, and in 2015 she spoke at Pope Francis’s Climate Change Rally at the National Mall in Washington DC.

In conversation with:
Bryan Parras is one of the Gulf Coast's most dynamic environmental justice organizers fighting along the entire central and eastern United States. Bryan grew up in a community on the east side of Houston, Texas, near one of largest concentrations of petrochemical plants, refineries and storage tanks in the world. He is deeply involved in the documentation of environmental racism experienced by marginalized communities from Houston and throughout the greater Gulf Coast region. He continues to help lead the rising environmental justice movement and is currently helping people in Houston and the Gulf Coast fight for a just Recovery after Hurricane Harvey.

About the lecture series:
In line with Sissy’s own history of exposing and responding to injustices and inequality as both a public servant and citizen, the lecture series brings to Austin and Houston internationally renowned scholars, activists and politicians who will inspire their audiences to think and act creatively to respond to some of the greatest challenges of the 21st century. Click to view previous speakers.

Listen to audio in Spanish below, interpretation provided by Antena Houston. Listen audio in English here. 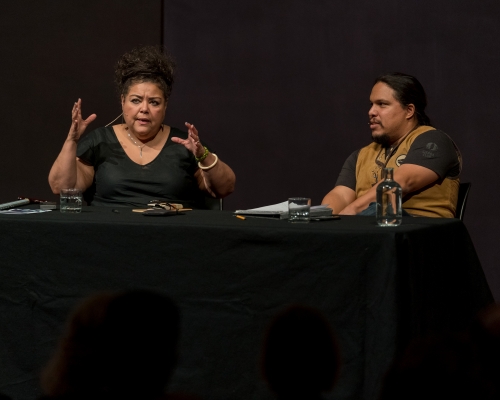