In observation of the Summer Solstice, the Rothko Chapel will be open from sunrise to sunset (approximately 6:20am-8:25pm). In addition, the following programs will be available at no charge:

Sang Chod, or Smoke Offering, is a ritual traditionally done in the early morning for special occasions such as the Tibetan New Year (LoSar). Participants are invited to cleanse themselves of negativities and offer good intentions as the smoke rises. Free breakfast provided by Panera Bread.

Kaminari Taiko of Houston, a Japanese drumming ensemble, will perform on the Rothko Chapel plaza to mark the end of the longest day of the year. "Taiko" is a Japanese word for drum. The art of taiko carries deep significance in Japanese culture. Samurai warriors used taiko on the battlefield to signal commands and frighten their enemies. Townspeople warned of danger by beating on taiko, and priests used taiko at religious ceremonies to communicate with the gods. Temples and shrines throughout Japan display taiko as a symbol of purification and to dispel evil spirits.

Kaminari Taiko was founded in 1996 by Jay Mochizuki along with a number of talented musicians from diverse backgrounds and ethnicities. The members diligently trained under world acclaimed Taiko Masters such as: Daihachi Oguchi, Seiichi Tanaka, Kenny Endo and Takemasa Ishikura to learn the fundamental skills, philosophy and spirit of this centuries old Japanese tradition. Free beer provided by Saint Arnold Brewing Company and other goodies provided by HEB, plus Texas Blizzard Shave Ice will be on site! 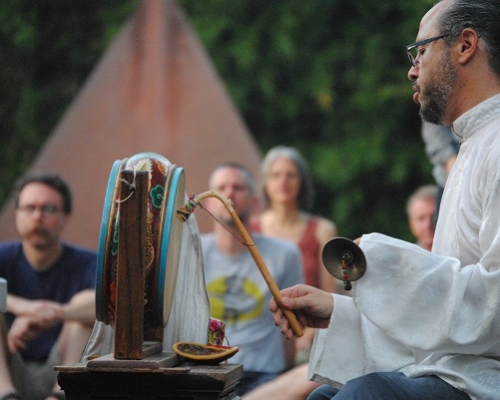