Labyrinth Walk by Jay Stailey & Performance of Ragas by Prema Bhat
​Pay What You Can, suggested contribution $10

We celebrated sunrise on the summer solstice with a performance of classical Indian ragas by Prema Bhat (voice), Purnima Bhat (vocal support and tambura), and Maheshwar Ajaykumar (mridangam) starting at 6:20am, followed by a labyrinth walk facilitated by Jay Stailey on the Rothko Chapel grounds. Light breakfast was provided.

In observation of the Summer Solstice, the Rothko Chapel will be open from sunrise to sunset (approximately 6:20 AM-8:25 PM).

About the presenters:
Prema Bhat is an accomplished Indian classical vocalist from South India with a Masters degree in Carnatic (South indian classical) voice and theory. She has served as a DJ for Indian classical music at Princeton radio, WPRB 103.3 FM and later as a music faculty at the dept of Music at Emory University in Atlanta and also at the University of Cagliari, Italy. She has performed in many places in India, US and Italy and has also given lecture demonstrations in many universities and often goes to public schools to give workshops in Indian classical music. She is known for her soulfulness in music. In the past several years, she has been composing music for the songs of the 15th c.composer Purandaradasa. She has been featured on WABE(Atlanta) Houston public radio and on Fox TV. When not doing music she practices yoga, meditation and takes care of her cat and family.

Jay Stailey, a Rothko Chapel Guild founding member, and former Houston-area public school administrator discovered the power of the labyrinth as a tool to focus his thoughts, clear his mind, and tune his inner being. His curiosity and interest broadened as he became a Veriditas trained and certified labyrinth facilitator, and leading him to become Houston’s first labyrinth coach. He has emerged as a fixture in the Houston labyrinth community, facilitating monthly labyrinth walks at the Historic Freedmen’s Town Labyrinth, guiding Houstonians on discovery walks and bicycle tours, and facilitating the construction of temporary and permanent labyrinths with Houston-area churches and schools. He has recently installed labyrinths for Core Dance performances in Atlanta, Georgia, and for the past two summers, on the Fourviere in historic Lyon, France, and on the equator in the cloud forests of Ecuador. He presented at The Labyrinth Society Fall 2016 Gathering in Houston, on “Building Community through the Labyrinth Experience.” Future labyrinth projects in Ireland, Mexico, Ecuador and Italy (in partnership with the Houston Grand Opera) loom on the horizon. This is Jay’s second year creating the turf labyrinth for the Rothko Chapel Summer Solstice celebration. 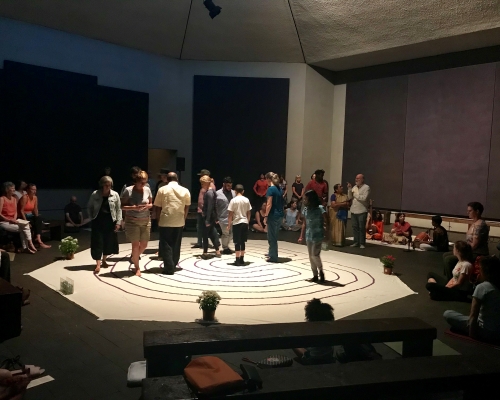