Summer Sounds on the Plaza: Jacqui Sutton and the Frontier Jazz Orchestra

Join us on the Plaza for a blend of jazz and bluegrass music from Jacqui Sutton and the Frontier Jazz Orchestra, as they present songs from their first two albums, Billie & Dolly and Notes From the Frontier. Reviewer C. Michael Bailey sums up the group's sound as, "where jazz meets the American frontier." Lead vocalist and bandleader Jacqui Sutton will appear with the quartet version of the Frontier Jazz Orchestra, which includes Paul Chester (banjo/guitar), Anthony Sapp (bass), Henry Darragh (keyboard), and Ilya Janos (percussion).

Describing a performance, Jazz Times' Christopher Loudon writes, "Widening her celebration of American musical spirit … Sutton opens with a ‘Summertime' that serves as splendid introduction to the steel of her pipes and the majesty of a voice that marries the earthiness of Cassandra Wilson to the warmth of Dianne Reeves. Jazz, bluegrass and honkytonk slip and slide together in Sutton's crafty blend of ‘Hummingbird' and Dave Brubeck's ‘Blue Rondo a la Turk,' while ‘Nature Boy' is reinvented as a fiery tango sung in Spanish and English."

Complimentary alcoholic and non-alcoholic beverages will be provided by Saint Arnold's Brewing Company. Steel City Pops will be on-site selling all natural creamy and fruity pops. In case of inclement weather, check the website and the FB event posting for updates. The Chapel will remain open until 7pm. 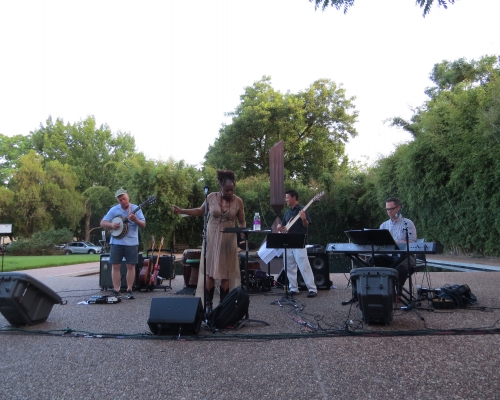