The Fight for Public Education

Public education in the United States is undergoing a profound transformation, driven by privatization and high-stakes testing. There is considerable concern that these reforms may deepen educational inequalities, including racial inequalities, narrow the scope of teaching and learning, and diminish resources for the neediest students, such art and physical education. Houston Independent School District Trustee Juliet Stipeche will moderate a conversation between national activist Brian Jones and local educator Hany Khalil about what this transformation means for education both locally and nationally. Brian Jones is an educator and activist in New York who has co-narrated the film, The Inconvenient Truth Behind Waiting for Superman and contributed to the book, Education and Capitalism: Struggles for Learning and Liberation. Hany Khalil is a Houston-based social studies teacher and organizer. He co-founded Community Voices for Public Education (CVPE), a grassroots organization of parents, educators, students, and community members working together to strengthen Houston's public school system so that all children have access to a high quality public education. Juliet Stipeche is a civil litigation attorney and a certified mediator. She was elected as the HISD Trustee of District VIII in 2010 and was re-elected in 2011 to serve a full four-year term and presently serves as the Board's First Vice President. In the summer of 2013, Juliet joined Rice University as Associate Director for the Richard Tapia Center for Excellence and Equity and remains at the law firm of Nagorny & Stipeche, P.C. A book signing and reception on the plaza follows the program.

Learn about the fight for public education. 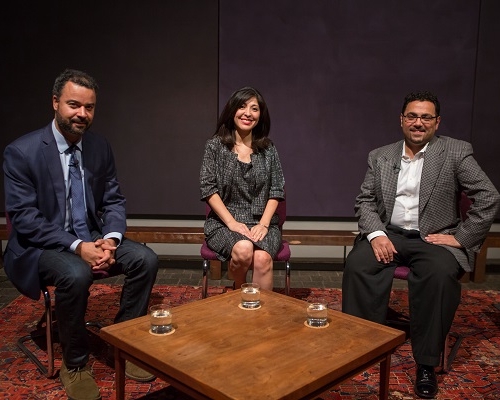