The Institutional Violence of Incarceration

In a state with one of the highest incarceration rates in the world, what impact does this type of institutional violence have on our society? With imprisonment disproportionally affecting minorities, are we creating a new type of slavery? Does incarceration accomplish rehabilitation, or is it simply another means for a prison industrial complex to profit? What does this mean for the wrongly convicted, and what types of nonviolent options do they have to resist the violence of institutionalization? Journalist Liliana Segura moderates a discussion with Rev. Dorothy Budd and exonerated prisoner Chris Scott to begin an examination of these questions, and more. Segura is a journalist and editor with a longtime focus on prisons, prisoners, and the failings and excesses of the U.S. criminal justice system. She is currently a Senior Reporter at The Intercept, and previously was an editor at The Nation. Segura has appeared on CNN International, MSNBC, DemocracyNow! and several other news outlets. Her writing has appeared at the Washington Post and has been included in the collection Against Equality: Prisons Will Not Protect You. Rev. Budd and her daughter authored the book Tested, which tells the story of how twelve men, including Chris Scott, lost a total of 189 years of their lives due to wrongful convictions. Before attending seminary, Rev. Budd served as a child sex crimes prosecutor in the Dallas County DA's office. Scott served 12 years and seven months in prison for a 1997 murder that someone else committed before being freed in 2010. A reception and book signing follow the program.

Learn about the violence of incarceration. 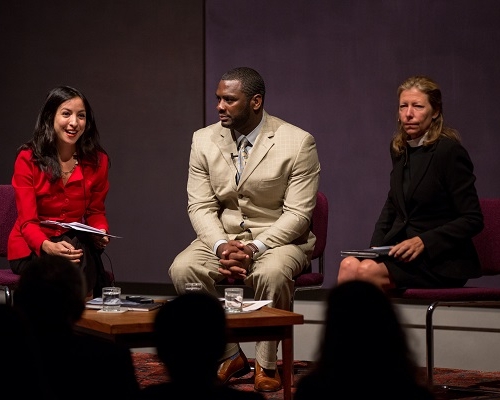