For the month of April, the Rothko Chapel presented a meditation in the Zen Buddhist tradition on the 50th anniversary of Rev. Dr. Martin Luther King Jr’s assassination. Led by Gaelyn Godwin Roshi of Houston Zen Center, this session explored the practice of allowing ourselves to be fully present with the moment and will lift up MLK’s profound impact on equity, peace and justice.

We enter Zen practice with awareness of our sensations, our breath, the sounds, the feeling of being a living body. In this simple yet profound meditation practice, the act of just sitting in the present moment can lead us to a sense of ease and release. Zen can be practiced by people of all faiths. It was originally taught by the Buddha as the method to live in awakening.

At 1:00pm, after the meditation, we had a moment of silence followed by an audio installation of MLK’s final speech, “I’ve Been to the Mountaintop,” played inside the Chapel and outside on the plaza.

About the series:
Since September 2005, on the first Wednesday of each month from 12-1pm, the Rothko Chapel hosts a meditation or contemplative practice focusing on a different spiritual or faith tradition featuring teachers and religious leaders from throughout the greater Houston community. The Twelve Moments: Experiencing Spiritual and Faith Traditions series provides opportunities for visitors to learn more about a specific spiritual or faith tradition, and experience a related meditation or contemplative practice, such as prayer, chanting, etc. 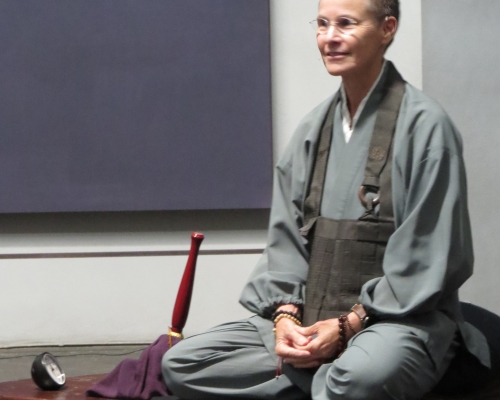