Ryan Makhani and Shaida Adatia discussed and led participants through a diverse range of Sufi meditative traditions with an emphasis on spiritual and mystical practices from around the world, highlighting the ideas of compassion and prayer. Participants were exposed to Islamic traditions from countries as far ranging as Turkey, Tajikistan, India, Indonesia, Iran and Morocco.

The meditation was in three parts:
-An introduction and brief on the richness of poetry and the oral tradition in Mecca in the 7th century.
-Islamic Music as sung and played in public places or private devotions. Due to Islam being a multi-ethnic religion, the musical expression of its adherents is vastly diverse. The indigenous musical styles of these areas have shaped the devotional music enjoyed by contemporary Muslims.
-The esoteric form of prayer known as Dikr, which is a Quranic term used for remembrance of Allah or repeating His name.

About the meditation leaders:
For the last decade, Ryan Makhani has served as a Religious Education Teacher for Ismaili Muslim youth focusing on ethics and humanities. Inspired by students in his Ethical Pathways to Human Development course, he founded BuildMyIdea.org, which aims to enable young people to be innovative leaders. As a teacher educator, Ryan has led sessions on mindfulness, self-awareness and servant leadership. He completed a Masters in Teaching and Masters in Muslim Societies and Civilizations from University of London's Institute of Education and the Institute of Ismaili Studies. Ryan has a keen interest in Sufism and mysticism.

Shaida Adatia is a professional educator with more than two decades of experience in Central Africa, Canada and the United States. She is involved in work around the world that promotes empowerment in youth through education. She is also involved in Houston’s interfaith community circles focusing on bridge building. In her spare time she loves to read about and research various faith traditions.

The Shia Imami Ismaili Muslims, generally known as the Ismailis, belong to the Shia branch of Islam. The Shia form one of the two major branches of Islam, the Sunni being the other. The Ismailis live in over 25 different countries, mainly in Central and South Asia, Africa and the Middle East, as well as in Europe, North America and Australia.

Since September 2005, on the first Wednesday of each month from 12-1pm, the Rothko Chapel hosts a meditation or contemplative practice focusing on a different spiritual or faith tradition featuring teachers and religious leaders from throughout the greater Houston community. This series provides opportunities for visitors to learn more about a specific spiritual or faith tradition, and experience a related meditation or contemplative practice, such as prayer, chanting, etc. 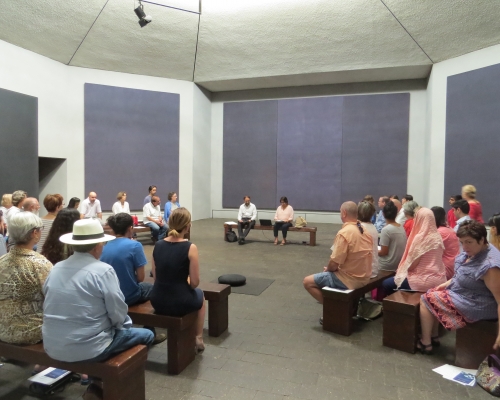