For the month of November, the Rothko Chapel presented a meditation in the Hindu tradition. Led by Dr. Harish Chandra of Arya Samaj Greater Houston, this session explored the philosophy and methods written by Patanjali in Yoga-Sutras, defining Yoga as cessation of mental transience that leads to self-realization. Dr. Chandra described three different methods of Yoga and then practiced Ashtanga Yoga.

About the presenter:
Dr. Harish Chandra was academically trained in engineering sciences with BTech from IIT Kanpur (India) and PhD from Princeton, specializing in theoretical combustion sciences. He engaged in engineering research from 1974-1996. He has completed intensive self-study of the Vedic concepts through wide ranging literature that includes the Vedas, Upanishads, Six Books of Vedic Philosophy, and other modern commentaries.  He is an authority on the Vedic concept of mind and its control, particularly in the treatises of Samkhya (by Kapila) and Yoga (by Patanjali). Since moving to Houston from London in 2015, he has been a spiritual guide with the Arya Samaj Greater Houston.

About the series:
Since September 2005, on the first Wednesday of each month from 12-1pm, the Rothko Chapel hosts a meditation or contemplative practice focusing on a different spiritual or faith tradition featuring teachers and religious leaders from throughout the greater Houston community. The Twelve Moments: Experiencing Spiritual and Faith Traditions series provides opportunities for visitors to learn more about a specific spiritual or faith tradition, and experience a related meditation or contemplative practice, such as prayer, chanting, etc. To learn more about other Twelve Moments, click here. 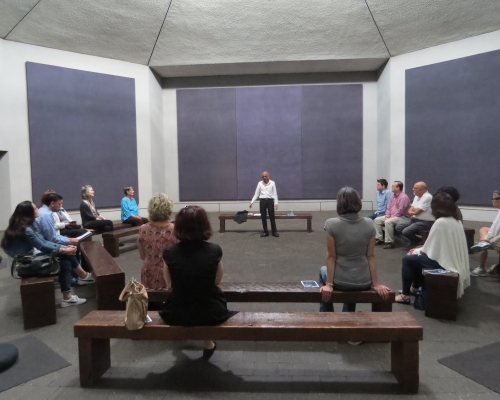