Art and Incarceration: Poetry, Theatre and Music in and about Captivity

Art and Incarceration: Poetry, Theatre and Music in and about Captivity
Concert, Ensemble Pi

For this interdisciplinary performance, Ensemble Pi presented music, text, and theater works that focus on the rise of mass incarceration, the racial disparities it reveals, and the emotional toll it takes on inmates and their families. The evening started with the world premiere of Rikers Island by New York composer Eleanor Cory, inspired by the anthology These Are Hard Times for Dreamers. Followed by Rzewski’s minimalist masterpiece, Coming Together, composed in the wake of the 1971 prison riots in upstate New York and powerfully expressing the frustration of life behind bars and anger about injustice. Joseph Assadourian, the narrator for Coming Together, will also perform an excerpt from his tragi-comic play, The Bullpen, based on his own incarceration. The performance closed with the sublime Olivier Messiaen’s Quartet for the End of Time (1941), composed and performed in the prisoner-of-war camp in Gorlitz, Germany, capturing the hardship and sadness of being in prison, while still conveying optimism.

About the presenters:
Ensemble Pi is a new music collective that uniquely connects pressing social and political issues and the idioms of classical contemporary music. They began a Peace Concerts series 10 years ago in response to the invasion of Iraq, and have since presented annual chamber music concerts giving voice to the struggle for peace. Every concert includes at least one commission, as well as contemporary classical masterpieces to address the historical tradition of “socially conscious” compositions. In the past, the group has collaborated with visual artists, writers, journalists and actors – including South African artist William Kentridge and American journalists Naomi Wolf and Jeremy Scahill – and have featured the music of John Harbison, Frederic Rzewski, Shostakovich and Penderecki. The Peace Concerts series has also protested the censorship of media, fracking, the Apartheid, and more. Performers include: Alexis Gerlach, cello; Moran Katz, clarinet; Idith Meshulam Korman, piano; Airi Yoshioka, violin; and Joseph Assadourian, actor and narrator. The group is joined by local Houston musicians Craig Hauschildt, percussion and Daniel Egan, trumpet.

This program builds upon the topic of ending mass incarceration addressed at our 2017 Spring Symposium and this year's focus of our biannual Rothko Chapel's Óscar Romero Award, which recognizes courageous, grassroots human rights advocacy. To learn more about the Award Ceremony and other related programs please click here. To learn more about other Concerts in the Chapel, click here. 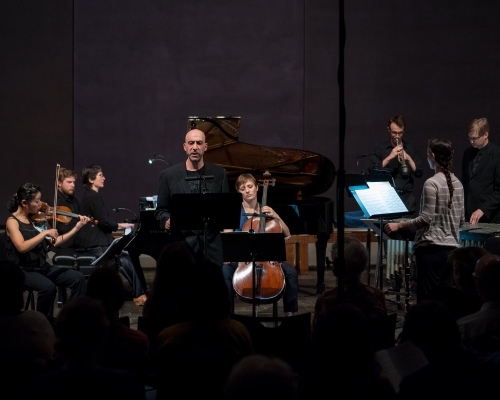