Immigration and Family Separation Crisis: A Call to Understand, Connect and Act

The Rothko Chapel and Houston Immigration Legal Services partnered to hold a thoughtful, non-partisan community gathering to educate the Houston community on why families are fleeing central America, the resulting separation of families when they arrive to the U.S border, and the issues around family detention and the criminalization of refugees. Program attendees heard first-hand accounts of what is occurring on the border and in Houston area immigration detention centers and learned about actions they can take on the local, state and national level to address this issue.

About the Program Participants:
Anne Chandler is the Executive Director of Tahirih Justice Center’s Houston office. Tahirih Justice Center is a national nonprofit that protects courageous immigrant women and children who refuse to be victims of violence. Since Tahirih opened its doors in Houston in 2009, Anne has provided strategic direction. Anne serves on the Houston Area Council on Human Trafficking and the Board of Houston’s Immigration Legal Services Collaborative. Prior to joining Tahirih, Anne was a Clinical Professor for the University of Houston Law Center where she served as the Interim Director of the Immigration Law Clinic.

Dalia Castillo-Granados is the Director of the ABA’s Children’s Immigration Law Academy. She is a graduate of the University of Houston Law Center. Prior to working at CILA, Dalia was a Senior Attorney at Kids in Need of Defense, a Staff Attorney at Tahirih Justice Center, a Clinical Supervising Attorney at the University of Houston’s Immigration Clinic, and began her public interest career as a Greenberg Traurig, LLP Equal Justice Works Fellow with Catholic Charities’ Cabrini Center in Houston. During law school, Dalia interned at US Citizenship and Immigration Services, Catholic Charities, and was a Public Interest Law Fellow at Boat People SOS. She was previously the chair of the State Bar of Texas’ Immigration Law Task Force.

Lomi Kriel covers immigration for the Houston Chronicle. In the past year, she broke the national news that President Donald Trump's administration is quietly criminally prosecuting migrant parents, and placing their children in federal foster care. The series of stories resulted in the release of one parent, and helped spur an ACLU class-action lawsuit and was followed by the New York Times, Washington Post, and Los Angeles Times. She has written about all aspects of immigration policy under Trump and Obama, including the crackdown on illegal immigration, end to DACA, changes to refugee and asylum policy, and the curbing of immigration court independence.

Alejandro Montes is a disciple, advocate, and an Episcopal priest. His journey to fulfill his vocation has taken him many miles from his home in Peru to Houston, Texas, where he has ministered for twenty-nine years. After theological studies in Lima and pastoring two churches in Peru, Alejandro moved with his family to Guatemala to study at the Seminario Teologico Centroamericano. Upon graduating, Christian and Missionary Alliance Church pastors invited him to lead churches in Harlingen and then in McAllen, Texas. Ordained to the diaconate in 1989 and to the priesthood eight months later, he eventually became the vicar of Iglesia Episcopal San Mateo. Growing to over 800 members, San Mateo became the first Spanish-speaking mission to become a parish in the United States, and Alejandro, their first rector.

As HILSC’s first Executive Director, Kate Vickery leads the overall strategic vision of the Collaborative, including facilitating meaningful collaboration among members, amplifying funding available to member organizations and leading grant-making processes, building strategic partnerships, and creating creative solutions to issues plaguing immigration legal services providers in Houston. Kate has a diverse professional background that includes leadership positions in the areas of immigration, criminal justice, community development, and environmental conservation. Kate holds a Masters of Public Affairs from the LBJ School of Public Affairs and a Master of Science in Community & Regional Planning from the University of Texas at Austin School of Architecture.

Moderator Zenobia T. Lai is the Legal Director of the Cabrini Center for Immigrant Legal Assistance of Catholic Charities. Prior to joining Catholic Charities, Zenobia had been a legal services lawyer for a quarter century, serving immigrants in Boston, San Francisco and Metro-D.C. A graduate of the University of Minnesota Law School, Zenobia has centered her career on making legal services available to those who lack the financial resources, political power, English proficiency or knowledge of the American legal system. Zenobia helped coin the term “community lawyering,” leveraging resources from private law firms and other professionals to help low-income communities. 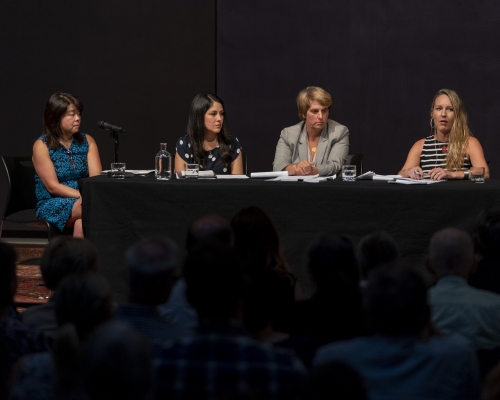