Sound Observations at the Rothko Chapel

Nameless Sound and the Rothko Chapel unites to present a performance by renowned experimental and minimalist cellist Charles Curtis. Curtis performs French electronic music composer Éliane Radigue’s Naldjorlak I (2004), a piece perfectly suited to the meditative, sacred space of the Chapel. After a decade’s-long career creating electronic music for synthesizers, Naldjorlak I was the veteran composer’s first piece written entirely for an acoustic instrument. Composed specifically for Curtis, Naldjorlak I utilizes a precise alternate tuning system, requiring that the cello’s pitch be adjusted days before performance. Also on this evening, Michael Pisaro presents a new work composed for The Nameless Sound Ensemble.

Since the early 90’s, Pisaro has been a member of Wandelweiser, a composers’ collective with a common interest in Cage and the use of silence in music. Since 2000, he has been on the composition faculty at the California Institute of the Arts. Previous to that, he served on the Faculty at Northwestern University.

Charles Curtis has woven a unique career through the worlds of classical performance and musical experimentation. For more than twenty years Curtis has been closely associated with the legendary avant-garde composer La Monte Young. As soloist and as director of Young's Theatre of Eternal Music String Ensemble, Curtis has participated in more performances and premieres of Young's music than any other musician. In the last few years Curtis has developed a unique repertoire of major works created expressly for the distinctive qualities of his cello-playing. The great American experimental composer Alvin Lucier has composed numerous works for Curtis, including pieces for cello and sine waves, cello and piano, and cello with large orchestra. French composer Éliane Radigue created her very first work for a purely acoustic instrument for Curtis, the hour-long solo Naldjorlak I. Curtis is currently the Professor of Contemporary Music Performance at the University of California, San Diego.

A reception on the plaza follows the program.

Enjoy an evening of music in the Chapel. 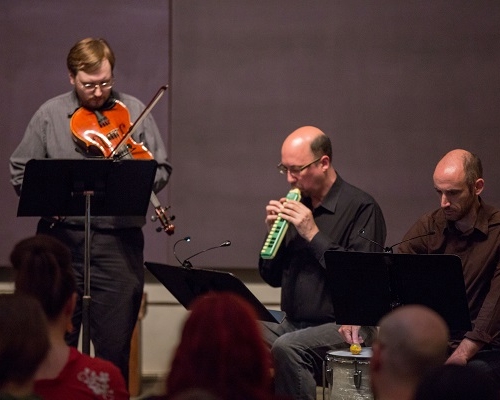