Women of sex trafficking face the dual realities of being victims while also being prosecuted as offenders. Julie Bindel was joined in conversation with Houston advocate Dr. Andrea Link and Lise Olsen, investigative reporter with the Houston Chronicle as they explored this topic from both local and global perspectives. The local awardee for the 2017 ORA, Kathryn Griffin Griñán, provides direct service and counseling to victims of sex trafficking in Houston.

In her most recent book “The Pimping of Prostitution,” Bindel takes the debate on prostitution legislation head-on, exposing the lived realities of women in contrast with the dominant discourse in current academic and liberal feminist debates. Based on more than 250 interviews with people involved in and affected by prostitution around the world, Bindel exposes the harms of the global sex trade and documents the emergence of the exciting and vibrant survivor abolitionist movement – leading us to question when the policy makers, politicians and international human rights organizations will start to reject the mythology around prostitution, hold sex buyers accountable for the damage that they do, and truly begin to fight for the human rights of women around the world.

This program was followed by a public reception and book signing with Julie Bindel on the plaza.

About the program participants:
A renowned investigative journalist, Julie Bindel has written extensively on a range of topics including violence against women, the international surrogacy trade, mail order brides, trafficking, and unsolved murders. She writes regularly for The Guardian, New Statesman, The International Business Times, and The Spectator, and frequently appears on the BBC and Sky News. She was Visiting Journalist at Brunel University, UK (2013 - 2014) and is now on the Advisory Board of Byline.com.

Dr. Andrea Link is a physician who did her medical training and residency at Stanford University School of Medicine. She developed and implemented Healthcare for the Homeless Houston’s award-winning Healthy and Whole program at Angela House, which provides women exiting prostitution and incarceration with comprehensive trauma-informed health and wellness programming. Dr. Link also researches the psychosocial and medical issues involved in street-level prostitution and lectures on the subject at both the local and national level. She is a Clinical Assistant Professor of Family and Community Medicine at Baylor College of Medicine and is the Program Manager for Healthy and Whole.

Lise Olsen is deputy investigations editor and senior investigative reporter at the Houston Chronicle. Olsen has more than 20 years' experience specializing primarily in crime, corruption, worker safety and human rights. Her work also has appeared in documentaries “The Eleven” (A & E -2017);  “Ruben Cantu: The Wrong Man?”(CNN-2015) and in Texas Monthly. Her series on a Houston-based human trafficking ring that for years kept importing girls from Mexico and selling them in local cantinas was published in the Chronicle and in Borderline Slavery: Mexico, United States and the Human Trade.

This program builds upon the topic of ending mass incarceration addressed at our 2017 Spring Symposium and this year's focus of our biannual Rothko Chapel's Óscar Romero Award, which recognizes courageous, grassroots human rights advocacy. This year the Chapel will honor two recipients, one internationally and the other locally selected. To learn more about the Award Ceremony and other related programs please click here. 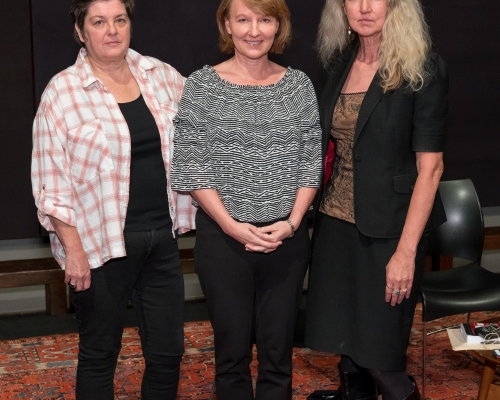