In commemoration of World AIDS Day, the Rothko Chapel held a Twilight Meditation, offered in partnership with Avenue 360 Health and Wellness, formerly known Houston Area Community Services and Bering Omega. The community joined to show support and solidarity with the millions of people living with and impacted by HIV/AIDS.

About the presenters:
Munoz has been immersed in Houston’s HIV/AIDS community since 2001 as a volunteer, activist, service provider and a survivor. He was a founding member of Houston Area Teen Coalition of Homosexuals (HATCH) and an active participant with the social group “20 Something.” Munoz has volunteered with the AIDS Foundation Houston visiting HIV/AIDS clients in the 12 Oaks Hospital and served as an honorary member of ACT UP HOUSTON, lobbying the Texas State Capital and the Houston City Council on behalf of the HIV community. He also was a member and group facilitator for Bering Spiritual Support Network and a member and once councilperson of Shambhala Meditation Center Houston.

Clark has worked in the service, personal care and human potential movements for the last 40 years. He began his study of meditation nine years ago and currently practices at Insight Meditation Houston. He often guides meditation practices at various institutions around the Montrose community. Diagnosed with HIV in 1981, Clark was inspired to focus his attention on working with LGBTQ communities and those whose lives have been touched by the virus.

The Chapel closed to the public at 5:00 PM for the meditation. 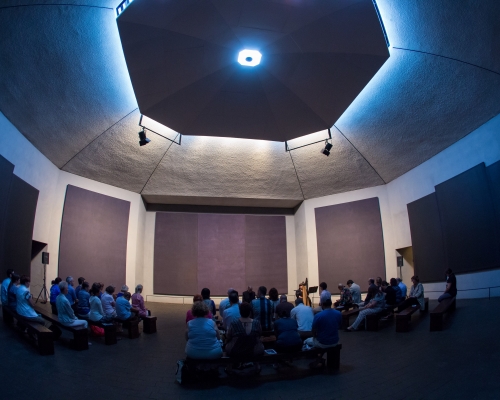