Over the next year, each Twelve Moments will highlight the role of music and sound in spiritual practices, and how these practices sustain us in the face of current challenges and injustices. For the month of March, the Rothko Chapel presents a meditation in the Hindu tradition, led by Dr. Hansa Medley and representatives of International Society for Krishna Consciousness (ISKCON) of Houston. In this traditional Vedic or Hindu meditation we will vibrate sacred sound in the form of the maha-mantra (maha - great, man - mind, tra - liberating). To start, our first mantra meditation will be chanted individually (japa), then we will chant the maha-mantra collectively in call-and-response (kirtan) accompanied by Doug Sauer (mridanga drum) and Damodar Sharan (harmonium & vocals).

About the presenters
Hansa Bhakti Medley M.D. has been practicing Gaudiya Vaisnavism since 1981 under the guidance of H.H. Tamal Krishna Goswami, a disciple of A.C. Bhaktivedanta Swami Prabhupada, the founder of the Hare Krishna Movement. In addition to being the Director of Outreach for the Hare Krishna Temple where she serves as a teacher, priest and advisor, she also works as primary care physician.

Douglas Sauer has been serving as a brahmacari, student-monk, in the ISKCON Houston community for the past 2 years. Born & raised in Pittsburgh, PA, he completed a BA in Criminology from Pennsylvania State University. While in college he developed an interest in eastern spiritual practices and began his personal practice of meditation and yoga. It was there that he met some practitioners of the Gaudiya Vaisnava tradition, and became attracted by both the rich depth of its philosophy and the sincere application of its principles by its followers. He is currently preparing for formal initiation or baptism in ISKCON.

Damodara Sharana das (Devesh Kasireddy) has been practicing mantra meditation since his childhood, for nearly 21 years, committing to a daily regimen of chanting and singing in prayer. He is a youth leader at ISKCON who also engages in outreach & interfaith activities. He is currently a senior at the University of Houston, studying Biochemistry with the hopes of pursuing medical school. 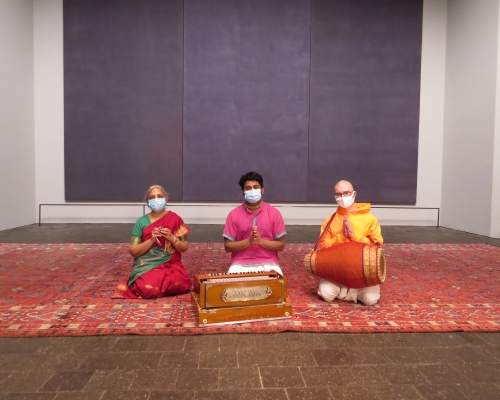