Over the next year, each Twelve Moments will highlight the role of music and sound in spiritual practices, and how these practices sustain us in the face of current challenges and injustices. In May, during the holy month of Ramadan, the Rothko Chapel presented a meditation in the Islamic tradition, led by Mohamed Hussein with Fatimah Ali, Imam Dr. Basem Hamid and Mouaz Al Nass, organized by the Minaret Foundation. A major part of Islamic tradition is the recitation of the Holy Quran. It isn't simply read during holy days - Muslims read the Quran daily and listen to it to relax and reflect. This session compared elements of sound in different recitation styles and showcase how these recitations contribute to the connection people feel when reading and listening to the Quran. This offering also showcased a thematic recitation where the tunes and melodies match the tone and story being read.

About the presenters
Mohamed Hussein is an Egyptian American singer/songwriter who has produced songs in both Arabic and English. His songs aim to inspire and deliver a positive message of compassion and unity. He has worked with some of the most talented teams in Egypt and has performed in Cairo as well as touring the USA. All of Mohamed's songs are meant to inspire and direct the listener to perform good deeds and strengthen one's most essential relationships.

Imam Dr. Basem Hamid is a practicing neurologist and pain specialist, as well as the Imam of Shadowcreek Islamic Center and a member of the Jurist Council of the Islamic Society of Greater Houston. Born and raised in Syria as part of the refugee program for Palestinians, he graduated from Damascus University’s School of Medicine and attained a Master’s Degree in Islamic Studies. Since immigrating to the United States in 1996, he founded Wasat Institute, an organization dedicated to exploring the intersectionality of health and spirituality. His work has been published numerous times regarding his research overlapping socio-economic issues, health, and faith.

Mouaz Al Nass is of Syrian descent and was born in Jeddah, Saudi Arabia. He holds a degree in Management Information System and studied Inshad and Maqamat (the various styles of religious poetry & songs) under foremost singers in Syria. An expert singer and drummer, he has been involved in many renowned musical performances in the USA, UK. He currently resides in Houston, Texas, and works for the University of Texas Health science center as an IT specialist.

Fatimah Ali is the outreach coordinator at Masjid Warithdeen Mohammed and is active in engaging both young people and women in Islamic activities. She has served with Interfaith Ministries on their young leaders team and is active in bridgebuilding efforts throughout Houston. 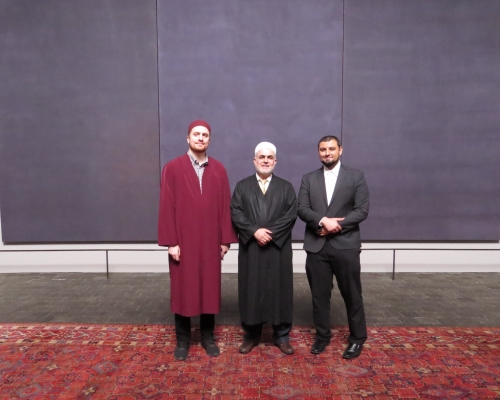